Finding Your True Self In The Dark Times 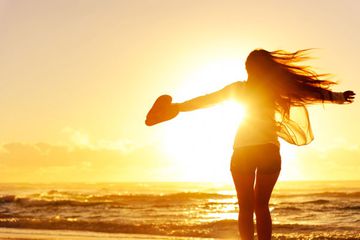 Life is a bundle of things - the good and the bad and the 50-50, as I call it. When the bad things hit you, they hit you with a vengeance. Like a tsunami or even multiple tsunamis washing out all the good that happened to you before.

Just like it happened with her when she went blind, in one eye in a matter of weeks. She was cooking, stirring the dal palak one morning, gazing out at the red roofed building out of her kitchen window, when she realized that she could not see clearly. Something was amiss. She closed her palm over one eye and then the other, and she realized that she could not see clearly with her right eye. She repeated and the same thing happened. She was numb with fear. Was she going blind?!!

She reported this to her husband and they both agreed to wait and watch. They both got busy with their office, son and chores till Saturday came. Time for the ophthalmologist, she thought.

The doc checked her and said all looked ok to her but to rule out things, asked for further checkups. Thus began the specialist doctors round; which went on and on. MRIs, tests, checkups, the endless rounds happened. Her vision worsened and in a week she was almost blind.

One week later she was in hospital being treated for optic neuritis. Tests showed that it was not the dreaded multiple sclerosis that was the cause but an unknown cause, which also could have been the humble viral.

In her semi private room, she lay, trying to calm her innermost fears, listening to the surrounding voices – concerned, animated, talking, laughing... of her neighbouring patients. She had refused the stark big private room and dismissed the modest TV set in that room, choosing the real noise of real people around her.  5 days later she was home with no ounce of strength left in her. That was the steroid side effect, the doctor informed her plainly.

Eventually, she started picking up the pieces of her life and strength slowly, taking the bus as she was not allowed to drive, taking things easy. She enrolled for a Reiki and healing class and started learning to control her thoughts. Because as the Reiki Grand Master said, thoughts are the like the devil. They control our minds and then our lives. They ruin our lives, the negative ones do. The positive ones heal, they help us blossom.

She started soaking in the positive words, the gentleness, started noticing the beauty around her, experiencing every moment for it was. She never postponed happiness. When she thought she ought to do the things that made her feel happy, she did.

She watched her favorite sitcoms and soaps on the tube, read Bollywood magazine, wrote to her heart’s content, met her friends, went to the movies, ate ice cream when she wanted too, and chocolates too. She ate, slept, talked and walked a new realization. She lived in the moment. And felt alive.

The negatives came of course, challenging her, threatening her newly acquired peace, but in 7 out of 10 cases, she pushed them away resolutely and succeeded in banishing them into exile.

She gave people the benefit of doubt without judging them immediately, she sincerely counted ten before giving in to a fit of temper; she saw the good in others, at least tried to, most of the times.

She chose to befriend people and talk to people who made her happy. She watched movies that made her happy, she read things that were positive, and full of promise like the morning Sun. She spent 5 minutes in her balcony after waking up and said her prayers every day. She laughed aloud more and sang more. She was a changed person.

She had found her trueself. She had been born again.

Sonali Karande Brahma Sonali Karande Brahma is a Brand and Content Strategist, Creative Consultant and Writer with 20 years of experience in creating powerful stories for advertising, brand building and communication. She has worked in mainstream advertising for major MNC and Indian brands. She thrives on ideas and writes on diverse subjects like education, parenthood, business, the art of business writing and social media. She can be reached on [email protected]
Share the Article :