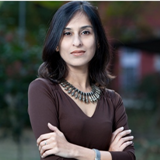 Gitanjali Chaturvedi works with The World Bank, South Asia Region. Gitanjali coordinates BEES (Business, Enterprise and Employment Support for Women in South Asia) which brings together organizations working for women's economic empowerment in South Asia.
Collectively, these organizations reach approximately 100 million poorest women. Gitanjali was also involved with the Global Polio Eradication Initiative in India, Nigeria, and Afghanistan and has written on a range of issues. She has authored The Vital Drop (2008), Slopes, Sunburn, and Solitude (2013) and Cocktails and Dreams (2014). The views expressed in this piece are entirely her own.

Why do we drop out?

It was a warm July afternoon. My colleagues and I had spent the morning visiting microfinance clients in Attock and were now scampering around the ruins of Taxila. As the meditative poise of a moustachioed Gandhara Buddha reminded us of the need to achieve balance in our lives, I put to them my eternal quest of bringing women at par with men. “Why do women mostly undertake traditional trades and occupations like food processing, tailoring, and embroidery?” I asked. “Can we not encourage them to perform high value work?” I was referring to women at the bottom of the pyramid who typically constitute the informal sector. Their work does not contribute to the GDP. These women form the backbone of the economy in South Asia but are invisible, unrecognized, and underpaid. They work because their income helps to meet basic necessities at home.

“There is a woman,” my colleague offered, “who recycles CFL bulbs. She works out of her home in the bazaar of Rawalpindi. A very industrious client – her husband was a waste picker who started repairing damaged CFLs for a modest income, but she has now taken this to another level.” That was it. We drove to Pindi, found her house amid the meandering by-lanes of the busy bazaar and got talking. Faiza was ambitious and the little income from recycling had given her the opportunity to dream bigger. She was educating her children, consuming better food, and also indulging in the odd make up item or outfit. People in the neighbourhood recognized her for her work; she was contemplating setting up a small unit and employing a few helpers. She wanted to invest in safety equipment. She appealed to us to connect her with training institutions so she could produce better quality recycled bulbs. Would she continue to work this hard if she saved enough money and got rich? “Oh no,” Faiza exclaimed vehemently. “If I saved enough and got rich, I would migrate to England.” “And what would you do there?” I asked. “Well, my husband will drive a taxi,” she replied with satisfaction.

Faiza’s story is not atypical. I have met countless women who strive to work hard and improve their income. They often take up work to supplement family income. But once that is secured, they drop out of the work force. I’ve seen Faizas from middle income families and I’ve met Faizas from rich families. Across the board, the pattern is quite the same. There has been a steady drop in female labour force participation in countries like India, Pakistan, and Sri Lanka. The National Sample Survey for 2009-10 shows that only 27% of women in India are employed or looking for work, down from 32% in 2004-05. In comparison, labour force participation rates for men are significantly higher, at 80%.Labour force participation rates of women in urban India were abysmally low, at 19% in 2009-10, almost similar to participation rates of women with middle-school education in rural areas, and much lower than illiterate or primary-schooled rural women.

Perceptions of ambition and personal goals – I once asked a group of women to write down what motivated them to work. I read responses such as “supporting my brother’s education in an engineering school,” “supplementing family income,” or “being able to provide extra needs for my children.” I don’t remember goals that focused on their own development or growth. When I prodded them, they smiled. Most work is time consuming, I was told. Women like to have time available for other things – social obligations, friendships, hobbies, and home. Personal goals and ambitions are often linked with being able to fulfil these other needs. A career on the other hand, is not perceived as a personal goal as it often supports family requirements and needs.

Mindsets on what jobs are suitable for women – Roshaneh Zafar, the founder of Kashf Foundation, a leading microfinance institution in Pakistan, believes in breaking stereotypes. Kashf offered training in trades and skills that were considered beyond the scope of women. “We offered courses in plumbing, electrical work, carpentry, masonry, mobile repair, IT,” she says, “but there were very few takers. It got me to wonder whether it’s just a small section of us that wish to rock the apple cart. Maybe women are happy with the mindset of what constitutes a man’s job and what doesn’t. Maybe they are happy to work part time as men are supposed to be providers.” I agree with Roshaneh. I have met several women who own boutiques and beauty parlours but can count the number of women who have occupations as carpenters or masons. BRAC (Bangladesh) is training women drivers and Delhi recently saw the birth of a social enterprise that offer women chauffeurs (Sakha Cabs for Women), but the demand for female drivers far outstrips supply. I recently met a woman in a clothing store who spent five years as a medical representative. She was earning well, but long hours in the field and a terrible bout of jaundice meant she had to find something else to do. “Men can run about in the hot sun and rain and are more resilient. Also, I was the only female rep, if there were a few of us, I would have stayed.” In the corporate world, women mostly perform HR or marketing roles. “A woman is likely to sell more than a man, whether telemarketing or face-to-face,” a male employer once told me. “We optimize their natural skills by making them responsible for marketing.” How does one balance gender relations without gendering work?

Infrastructure for quality childcare and old age support – “I’d never engage a nanny for my kids,” my friend Richard said quite firmly in response to my question about why he his wife didn’t have a full time job. “If she were a banker or lawyer, the kids would be brought up in playschools and crèches. That’s an expensive proposition,” he added. Richard lives in the UK where child support is available. In South Asia, quality day care facilities are not readily available to most mothers. Many women also drop out to take care of aging parents and in-laws. But globally, childcare and old age support is poorly accessible due to either cost or availability. The ICDS in India runs anganwadi (nutrition) centres but these focus more on feeding than enabling women to work full time. And they exist in rural areas. The urban market is crying for quality support to enable women to work without worrying about children or parents and this need is still unmet.

Choose one (a) family, (b) career– I’m not quite sure when this becomes an option, as many women continue to work and raise children. However, I know several women opting to work part time, or even preferring to assume roles involving no outstation travel and fewer responsibilities. These choices are not always spelt out, but they seem inevitable as a family grows and women are expected to meet most household needs involving children and the elderly. The transition is never easy. And return to the work force even harder for skilled or professional women. The solution lies in developing infrastructure to cater to child and elderly care along with shifting mindsets in favour of eliminating the choice between one and the other. The only profession where these choices aren’t made is teaching as they are perceived to allow women to look after their home as well as earn an income.

Men ought to take care of us – “I’m tired of struggling every day. Life is hard and I don’t know why I work non-stop. I need a man to take care of me,” wailed my friend Roshni one day. Roshni was a biochemist in a leading firm. I was surprised by her sentiment, but it was heartfelt. During my interaction with women across the world, I have discovered that a majority of women agree with Roshni. Mindset? Perception of gender role? Or are we failing to create an environment conducive for women to participate equally in the work force? Why should work seem a struggle?

Workplace environment – And this brings me to the issue of workplace environment. When my sister joined her company, a leading multinational, she was probably one of the few women to be recruited. Her boss admits he hired her despite misgivings that she would “marry and leave”. The company avoided hiring women as they were considered unreliable. Within many organizations, basic support structures to make women comfortable at their workplace are not available. No counselling services, grievance redressal cells dominated by men and a general apathy towards female employees. I once worked for an organization where a female colleague had accused her boss of sexual harassment. We had no doubt that the issue would be dealt with careful consideration as our organization was reputed to be representative and gender sensitive. Imagine our shock and horror when a committee comprising three men was constituted to investigate! We weren’t surprised when the accused got away scot free.

Confidence, counselling, mentoring – A girl is prepared for a career at school. Higher education simply qualifies her for the job market. Career counselling is still not widely prevalent in schools and most research on jobs has to be undertaken by young girls and boys, who intuitively decide what’s good for them. Part of the problem is the gender segregated schools and colleges that are widely prevalent in South Asia. While arguments have been made both ways to illustrate better academic performance in single sex schools, there is no denying that one gets a sense of competition in mixed schools. At a girls’ college in rural Punjab, I asked the Principal why girls weren’t getting employed after earning their degrees. She said there weren’t enough vacancies for teachers. Is that all that girls can do? She seemed to believe so as she went on to elaborate how private sector was unreliable and teaching jobs most secure.

Role models – Looking back, I realize most of us need role models. Who do we aspire to be? We never understand opportunities even when they stare us in the face. Our role models need not be highly successful career women – they simply have to help nurture the seed of ambition in young minds.

As our markets open up, there is a plethora of productive activities educated/skilled girls can engage in. We ought to study, speculate, and pre-empt the market to stay ahead of the curve. It was this astute understanding of what the market needs that got Faiza to set up her recycling business. We need to create an environment that helps her to continue to stay, prosper, and grow.