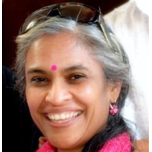 Geetha Kannan is currently the Managing Director of Anita Borg Institute's (ABI) operations in India. She is passionate about diversity and inclusion. Geetha has a deep insight into human performance and development, stemming from more than 20 plus years of hands-on experience in various functions like Marketing, E-commerce, Diversity. Sustainability, Planning and Human Resource Management.

The global technology industry lags behind all other industries in the proportion of women employed at managerial level. Undoubtedly, as a group, women can bring a distinctive perspective to technical organizations and are known for a diverse key skill set -- including soft skills and relationship building -- that are essential in any well-rounded team. However, their own socialization may be standing in the way.

But despite the inequity in the technology arena, the women who are in tech are extremely successful. According to a study conducted by Kauffman Foundation, women-led hi-tech start-ups achieve 35% higher return on investment. Unfortunately they form a very negligible number of tech start-ups.

In the first gender benchmarking study conducted recently by experts in international gender, science and technology issues from Women in Global Science & Technology (WISAT) and the Organization for Women in Science for the Developing World (OWSD); Researchers have found that numbers of women in the science, technology and innovation fields are alarmingly low in the world's leading economies, and are actually on the decline in many. India ranks the lowest overall of the countries in this study— Brazil, South Africa, India, the Republic of Korea, Indonesia, the US, and the EU.

A wide gap exists in the ratio of men and women pursuing technical degrees, jobs and exploring entrepreneurial opportunities. Women entering the ICT (information, communication and technology) workforce are over-represented at the entry level, but gradually drop out as responsibilities on the home front take precedence.

It is extremely important to increase the representation of women and girls in the technical fields. Science, technology, engineering and math have become extremely significant in an interconnected global economy and the consequence of excluding half the world's population from this progress will be disastrous for the global economy. Female voice includes the diversity and imagination of a core group of people, who care about how wonderful and innovative IT can be.

According to many analysts: Having women executives matters not just for purposes of equality but for product development and the bottom line. Studies have all found the same thing: Diversity benefits research, development and innovation.

Influential women leaders in tech like Yahoo's CEO Marissa Mayer and Facebook's COO Sheryl Sandberg have been vocal about the need for more women in technology and for a corporate environment where they can succeed.

The issues behind the low levels of female leadership in technology are complex and many. The tech industry has an image problem - think geeky man alone at a computer - that repels girls from pursuing it. Other reason include all the usual problems of childcare, cultural & gender bias, family commitments, extreme work conditions and glass ceilings. There are no simple answers but I strongly believe in the power of role models to inspire, encourage and motivate young women to make different career decisions or to aim for higher goals.

A recent research from the Center for Talent Innovation has shown that there has been a significant Off Ramp issue as women drop out at mid-management levels due to a combination of pull factors (societal expectations, the pressure to be the care provider to children and to parents, the lack of infrastructure for childcare and education, etc.) and push factors - unfriendly work environments play a significant role: 72% of Indian women professionals leave because their careers are not satisfying or enjoyable; 66% leave because they feel their career progression is stalled. The good news: An overwhelming 91% of Indian women want to return to work, similar to the US (89%) and significantly more than Germany (78%).

Former president and CEO of Hewlett-Packard, Carly Fiorina, once said in an interview, "it's clear that there aren't enough women in business, and the stereotypes will exist as long as there aren't enough of us." If tech companies are not attracting and promoting women into senior positions, then there are fewer role models for others to aspire to, and valuable female talent will continue to favour other sectors.

This current disparity hurts the technology companies themselves. First, if half of the users of technology products and websites are women, then one would think that having women not just on staff, but in positions of leadership to define future directions for the company, is in their direct pecuniary interest.

To be clear, this is not to say that every women in a technology company is an expert in how to create products for women—that is absurd—but certainly technology companies could benefit from an understanding of the perspectives and needs of the "largest single economic force" in the world.

Research shows that [women's] choices impact up to 85 percent of purchasing decisions. By some analyses, they account for $4.3 trillion of total U.S. consumer spending of $5.9 trillion, making women the largest single economic force not just in the United States, but in the world.

Attracting and retaining the best talent, male or female, is critical for long-term success and competitive edge and the implications are that the tech sector is losing out to other industries. Imagine how much more successful many of these technology companies could be if the very best female, as well as male, talent was playing an active role in shaping the industry!

Various studies on diversity indicate that when accepted and valued, diversity is found to enhance individual productivity, organizational effectiveness, and sustained competitiveness.

Diversity in today's work environment should start right from the top in most companies, and the companies that have been positive have shaped cultures where awareness, acceptance and diversity are core company values. It is so much better than bringing out those glossy brochures with a variety of faces from different genders, races and other groups. Organizations world over have slowly started to realize they need to 'walk the talk,' living and breathing diversity every day."

Women and girls at all levels need to be engaged by technology and they need career choices and opportunities which attract and inspire them. They need to see what is possible and be helped to achieve their full potential, not to be distracted by obstacles.

More and more platforms need to be created to celebrate the achievements of women, helping to promote role models who will be an inspiration for others. Companies should also extend tangible support to women to help her support her career and family in equal stead.

True prosperity is when all the stakeholders of an organization are happy. It is about bringing joy across the spectrum. It means bringing change to the way business is viewed, as well as how the business goals are achieved. It requires espousing and upholding value systems that are far more superior; to provide an environment that values diversity and fosters performance; and to be a torchbearer of ethical conduct across the corporate