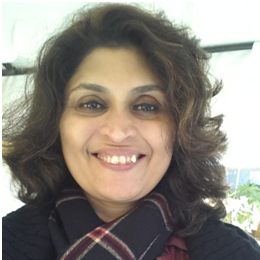 Deepa Soman is Founder, CEO of Lumière Business Solutions Private Limited, a marketing research and business solutions firm she founded 17 years ago. Lumière offers work opportunity to women professionals from diverse industry backgrounds. 50% of the core team works from their home office using the full-flexi work option. The company hires women for their competencies and trains for skill. A unique business model with distinct people practices, an enabling technology environment and work processes are what enables women to get the work opportunity and 'stay on the ramp'.

What it means to be a woman professional

My mother told me that my father had been disappointed at my being born a girl. The reason was simple. A natural athlete who played every game to perfection, he wanted to teach his son boxing, sprinting and a mean game of football and hockey. Like most children of my age and socio-economic class, academic excellence was to be the eject button to transcending class limitations. I worked hard and was focused and was generally popular with my teachers and classmates. College and an MBA followed.

My first foray into a man's world began when I worked as summer trainee in Exim Bank. I was 20 years old and completely unexposed to work ways. My only work experience was being a tuition teacher for three college years. My summer project involved working with a male guide on a project on special economic and free trade zones. I traveled to Delhi for the study, and had a very safe and insightful, yet uneventful, fun stint.

At 21 I was recruited by Hindustan Lever Limited into their management training program. Those 5½ years were the only time spent in a mainstream career. My experience of 'difference' was when we were sent on our two-month rural stint. Women management trainees stayed on the Etah factory campus in a well-appointed guesthouse. Male trainees on the other hand lived in the village usually with the 'mukhiya'. Men made it seem like we women had a cushy experience while they roughed it out in the wild. This wasn't entirely untrue, for the backdrop was Eastern UP notorious for kidnappings, caste murders and armed robberies. We had a jeep at our disposal, while the men used the bus. We worked as a deputy collector might and had 5 villages each under our purview.

I had an unlikely experience at the time of my confirmation interview with the then Chairman of HLL, Dr. Ashok Ganguly. Dr. Ganguly wanted to know what my plans were and where I wanted to be. I was very categorical in telling him that I wanted to be in sales and not in brand management. My reasons were simple. I was getting married in the following month and wanted to invest the first three years of my working career in a sales and distribution job. Women managers were usually confirmed in Brand Management, which was largely an office job. On the other hand, being an Area Sales Manager meant travelling for nearly 20 days. I was very clear that it had to be sales for me, for I felt that not having that vital frontline experience would result in an early glass ceiling. The company transferred me to Lipton India Limited where I worked as Area Sales Manager looking after parts of western Maharashtra and Madhya Pradesh. It was a flabby structure with 45 salesmen and 2 sales officers reporting to me. Everyone that reported to me was above the age of 45!

Work involved a lot of talking, travel and interacting with people and enabling them to work well. I learnt priceless lessons in people management and gained the respect of my sales force and that of my stockists. It was physically very challenging but I got a chance to be home Saturday and Sunday. Mondays were in the branch office, and I'd be on tour from Tuesday through Friday week after week for a long time. I loved the travel to new places and meeting of new people. I truly grew up in that job but not once did I feel uncomfortable or disadvantaged because I was a woman. There were times when I would be getting back in a cab through dark and lonely roads, driving hundreds of kilometers on a given day. When it would get particularly lonely, I would be afraid, but somehow, it always ended well.

One unsavory experience stands out, partly because there were so few, was a very influential stockist in Pune. I had a meeting with the stockist's son who managed the business. The meeting took place in his cabin on the first floor of his chamber. The chamber had a full-length pin up of a near nude woman. I remember being extremely uncomfortable through that meeting. I thought then that the meeting place was a deliberate choice, possibly to put me on the back foot during some interaction. This was the one time I must have appeared a lot more confident than I felt.

I experienced some patronizing comments from a senior manager in the company when I was in the Lipton Bangalore. I had just joined back from a four-month maternity leave. A couple of times that he spoke with me that month, he would only say, 'I don't know how you do this. Prabha and I would never be able to!' Perhaps this created the necessary dissonance, but I remember thinking that it was none of his business and that I ought to have put him in his place. It was also one of the reasons why I availed of a policy that had just been introduced to women managers. It meant a 2-year leave with a lien on job. I did one international work stint in Jamaica, working in marketing research and teaching at the University of West Indies. The experience was fabulous and gave me the confidence to be on my own.

I had one unsavory experience at a client meeting a few years ago. I was in the client boardroom and we were presenting our proposal. I was explaining management costs and what line items we had considered. At one point the client said, 'Does it mean that with this amount you will do whatever it is we ask you to do'. I saw red and caught the look and tone. I had decided I didn't want to do the project. The client's partner called me several times, trying to talk me into agreeing to do the project, but I was clear. I want every interaction to be friendly professional, respectful and above board, else I will walk away from anything.

Feeling unsafe or scared can happen to man or woman. Years ago I remember a train journey from Kolkata to a district in Eastern Bihar. Four of us were traveling together - a colleague and two clients. We were three women and one man. Journey into Bihar can feel unsettling. I wore my sindoor, mangalsutra and a saree. The sindoor was bought especially for the travel to Bihar, my first visit to the state. It felt vulnerable being a woman. Our work with farmers and towns people went off well, but we were scared until we returned to Kolkata.

I have talked to many women professionals in the course of my work in the area of women's safety and diversity in multinational companies. Delhi is one city where women have experienced a sense of personal violation, especially when one travels on public transport. Safe late travel and guest houses are top the list of priority must-haves. Some organizations allow women airfare and stay in a better grade/ safer hotel in smaller towns, so much so that men feel discriminated against.

Lumière, the company I set up in 1996, is meant for women professionals who otherwise need to make an 'either or' choice between work and family, especially after they have kids. Our business model and work processes allow women with specific competencies and work experience to get trained and work in the field of marketing research. 50% of our team members work from home, full time and full-flexi.

In the work world, my advice to all women is, gauge the circumstances. It's about putting up a fight, but also as Kenny Rogers might say, 'knowing when to walk away and knowing when to run'. In the work place a woman ought to call the bluff by putting her foot down when things make her uncomfortable. She needs to take responsibility and make choices for herself, standing up for what she believes. The confidence is initially instilled in the family and reinforced in later years. I have a daughter who is 15 and when she comes into the work world, life will be even more democratic than it is today. I will tell her that she has to speak up what for is right. People who take advantage of the women are usually weak and cowardly. A woman medical representative I interviewed told me that women in sales dress down or dress dowdily and try and assume an androgynous persona to deliberately make themselves unattractive. Sometimes they feel obliged to smoke and drink to gain acceptance from male colleagues. She spoke of the sniggering insinuating fellow medical representatives she has overheard say, 'now if she goes into the doctor's chamber, she will take very long".

All is not rosy but all is not that bleak either. As a stubborn optimist, I will say that we Indian women are extremely fortunate to be born in a free country, importantly a democracy. I shudder what it must be like to be a woman professional in Afghanistan who was working right until the Taliban deemed it inappropriate and illegal! Given a choice I want to be born a woman, but in a family, state and country that gives me the freedom to be deeply creative, abundant, inspiring and free to choose my life, or with the courage to stand up and fight for what I believe is right.