What Did Emojis Want? Equal Representation. And, Now They Have It! 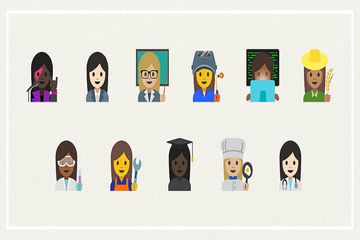 According to Google’s own research, “over 90 percent of the world's online population use emoji”. And now, a chunk of those emojis will be representing women--women with equal opportunity careers. Move over princess emoji, plumber emoji is here to do a real job.

Why is this noteworthy? Because pop-culture reflects real life, and sometimes influences it too. Don’t believe me? Just go ask the thousands of gamers out there looking for Pokemon-go, and stepping outdoors after ages. Or perhaps you can logon to Twitter or Facebook and look beyond the outrage, see the number of issues addressed, jobs done, complaints heard on the platforms.

When they first came online, emojis were quickly accepted as cute, quirky and fun images used to represent a word, feeling, or even a persona. And that is where the emoji met its first tiny pot-hole on the cyber-highway. How many people-types can a tiny toon represent! We humans come in too many colours, shapes and sizes to be put in fixed ‘looks’, don’t we?

Then there was the existential question of what these toon heads represent. Could they be doctors? Sure, add a stethoscope to his image? Could they be cops? Sure, here’s a policeman, cap, badge and all. Ditto fireman, plumber, miner--just add identifying tools and boom, you turn them into professionals.

Wait a minute… these emojis are all male! Where are the female versions? Oh, but look harder, do you not see the princess with the tiny tiara, the bride with the pretty veil, or the girl getting her haircut? But none of them are jobs!

Women play an important role in the global workforce, and the numbers are increasing. Women are exploring diverse careers, and pop culture is beginning to notice.

And, Google has now decided to promote gender equality in the emoji world too.

“The Unicode Emoji Subcommittee has agreed to add 11 new professional emoji, in both male and female options and with all the skin tones,” announced Google in its official blog on Sunday, July 17.

In May, the internet giant had proposed the new emojis  to “represent a wider range of professions for women (as well as men), and reflect the pivotal roles that women play in the world.”

Apart from the brand new emojis, 33 others will now have female versions too. “You'll be able to pick both a female runner emoji and a male runner emoji, or a man or woman getting a haircut,” the blog stated.

Wait, it gets better, especially for tech-loving creative folk.  The Google initiative ‘Made with Code’ lets users create their own emojis as it were, and learn basic coding in the bargain.

The new emoji have been approved, and will soon be available on all Google platforms.

images not our own