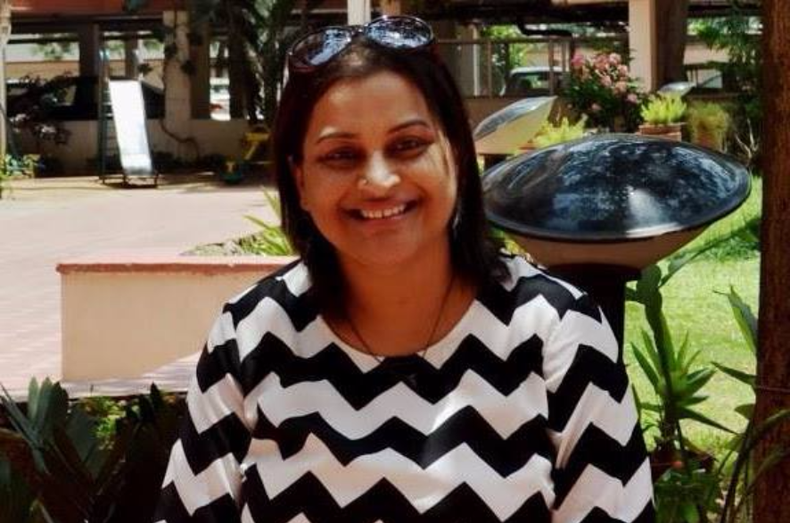 Early morning, when the rhythmic hymns and Sanskrit  chants reverberate from the insides of a temple, it soothes our agitated mind. Shlokas or Sanskrit verses have a calming effect on our nerves. Imagine if we impart the knowledge of Sanskrit shlokas  among our youngsters, wouldn’t it help them in attaining more mindfulness and the much needed stability?

Well, Divya Doraiswamy  has single handedly started this initiative of teaching Sanskrit shlokas to young kids with Gurukulam. The shlokas, she says gave her the strength when she was battling her divorce. She says with a whiff of confidence that her job is secure, because no one wants it. Actually no one has even thought of starting with something like this. A very SHEROES spirit; don’t fight the old, build something new.

“A Masters in Economics, A SHLOKAPRENEUR, a theist in every right and an extremely confident young lady in my 30's living in one of the most beautiful cities of India-Bengaluru. Love the temples I visit, absolutely long for the annadhanam I part-take in every Thursday and my frequent visits to an old age home helping old parents who have been left to the mercy of the Lord to get free medical treatment and medicines is the best thing I've ever been a part of...And yeah, My Shloka School -GURUKULAM doesn’t remain a dream any longer.

I personally believe -"It takes a big heart to APPRECIATE someone and a SMALL MIND to Laugh at someone. You can choose to either have a big heart or a small mind " ~ Divyaa Doraiswamy

Battling the phase of divorce

A few years ago, when I was fighting a long drawn out personal battle, and found myself not being satisfied with my professional life, I started reciting the runa vimochana stotram and the Hanuman Chalisa, which I learnt growing up.

When I found solace through reciting shlokas, I went back to my mother and started scouring the internet for ones I could learn.

Chanting shlokas was my ultimate resort – it helped me get rid of my frustration, and got me out of difficult situations. It’s even changed the way I look at life. I feel so much more positive now.

And that’s when I decided that this learning should be put to good use and that’s how GURUKULAM was born.

GURUKULAM -The Shloka Learning Centre  is a one of a kind MOBILE SHLOKA SCHOOL in Bangalore.

I started off Gurukulam somewhere in October 2014 and worked with a few children in my apartment and found out that a lot of parents were keen in sending their children for such classes. These classes are for kids between 4-16 years.  At present Gurukulam has close to 50 kids.

Shlokas are taught only in SANSKRIT (though Sanskrit is a language which children at that age ..i.e 4-9 years is not something they have been exposed to earlier) but I read that when kids as little as 3 are exposed to a variety of information...their grasping capacity is something spectacular....So push all that you can in their little brains and see them gain as much as knowledge as possible is what I believe in)

At this point in time I do classes in different Apartments, Pre Schools, Dance-Schools ,Studios Classes for kids with special needs and SKYPE lessons.

I also do One-on-One classes for kids at their residence. These classes are actually called the Mother-Baby Duo class where kids as little as 2 and 3 are exposed to learning shlokas but here the mother does more learning than the kids actually do and during the week the mother does repetition of these shlokas with the kids. So, here the mother is more the teacher -Mothers are the best teachers!

I should say the journey has been amazing. We have reached out to kids across the globe through channels like FACEBOOK ,word of mouth and advertisements in small stores/shops/ boutiques/ sweet shops.

What started off with 6 children today boasts itself of teaching close to 50 kids. We have a learner's manual in place and follow a uniform learning process for kids across the globe.

GURUKULAM basically aims at keeping the traditional roots in place and has nothing to do with Religion  or Spiritualism. The idea behind starting GURUKULAM is to keep our future generation i.e kids abreast of our culture.

Having said that classes in foreign languages or  ballet lessons or art classes sure take more importance than shloka classes but there is a set of parents and children who are keen on taking shloka lessons.

Since GURUKULAM is run only by me, I plan to expand the present no. of 50 kids to 100 kids by the end of 2018. I plan to teach a lot more kids with special needs and expand my service activities to Blind Schools and Govt.Schools ( I am still in talks with a few of them)

Today I conduct shloka sessions more as an after school activity. There are a few pre schools which are keen in introducing shlokas to kids as a part of their daily curriculum. So I am hoping we would be a success in reaching out to a larger crowd in years to come.

When your personal life is a disaster, it’s not the end of the world…..When everything seems to be over, the hope to restart  your life is difficult but not impossible. It took me 10 longs years to restart my life. So whenever I look back and think that I am a failure, The birth of Gurukulam-The Shloka Learning Centre goes on to prove that always expect the unexpected and failures in life can be successes in no time, That’s me!!!