Being Adaptive Is Key To Being A Good Leader 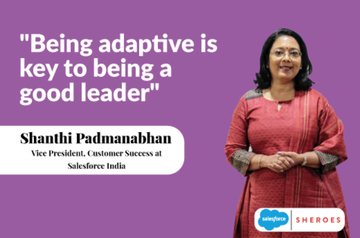 With varied passions, from building products to classical dance, Shanthi Padmanabhan, in her remarkable career, went from working on Global Positioning System for ISRO to leading global teams in some of the world’s top organizations.

Her journey of determination has weaved a path that is inspirational and instructive for women everywhere. From taking a mid-career "jobbatical" to taking a pay cut for the right reasons, Shanthi Padmanabhan has taken risks and made tough choices.

Read her interview with SHEROES and benefit from her advice on issues from work-life alignment to building cutting-edge products.

Figuring out my niche in technology

When one is born into a family of lawyers and doctors in India, your career path is almost always predetermined for you. However, growing up, I realized early on that I wanted to take a different path.

I developed an interest in building things and spent a lot of time understanding the nuances behind them. With this realization, I still lacked guidance on how I can go about building a career around my interest. A curious mind and a strong intuition led me to choose software as the key theme in my career.

Back in the day, no one could explain to me what the difference between software and hardware was. Unlike the age of Google we live in today, I buried myself in library books to understand and chart my path in the unheard field of software development.

Right from school, the only thing I focused on was getting an engineering degree from a prestigious college, as that was the only known way into a career in technology.

I went on to pursue my Master's in advanced computer systems - This is where I truly experienced how one can create magic with software.

We all face situations where we seem to make tough decisions. However, my ever-supporting and encouraging family pushed me to excel in whatever I chose, and have been a guiding force for me under both professional and personal circumstances.

Soon after I was married, I decided to fund my own higher education by taking up a job as a teacher for engineering students. My professor back then also played a huge role in understanding the finer nuances of technology.

During my stint at ISRO, I was put in charge to lead one of their most important projects, despite me being pregnant. Most women I knew had to take a step back from their professional path in such a scenario.

However, my mentors at the time showed so much faith and confidence in my abilities, such that it changed the course of my life and career entirely.

At another critical point in my career, much against the advice of my well-wishers, I decided to take a pay cut, to be a part of something that I wanted to build from scratch. This decision eventually led me on a path to create cutting edge, innovative solutions, to guiding large teams in India and the Netherlands on strategic initiatives for over a decade.

When I moved to the Netherlands in the early 2000s, I had the opportunity to learn from world-class leaders. In this role, I particularly realized how important it is to recalibrate one’s leadership style in line with a multicultural team, spread across multiple locations.

Understanding how to create a relationship of trust between the teams and navigating cultural sensitivities effectively was one of my learnings. Over the years, I’ve realized that it is important to be adaptive with your leadership styles in order to a well-rounded leader.

I often equate leadership traits with that of being a parent. With children, you learn to grow along with them. I truly believe that I'm only as good as my team.

So, in its entirety, leadership is a lot like parenting. At Salesforce, I try to work closely with each of my team members, to figure out their strengths and to play to them, which helps the larger team function better.

The pandemic has shown us how working collaboratively can mutually benefit all team members. Be it a personal or professional hurdle an individual is trying to overcome. This period has taught me the importance of being an empathetic leader.

During these unprecedented times, I have also noticed how team members have gotten so much closer as compared to pre COVID, which is indeed paradoxical and amazing at the same time.

Challenge yourself and be open to new opportunities

After spending a considerable amount of life chasing both my professional and personal goals, I enjoyed my first ever break after 31 years in the workforce when I moved back to India from the Netherlands.

During this period, while I was spending time with my son in Toronto, I was approached for a role at Salesforce in India. The opportunity seemed too good to pass, as the company was a stage where I once again had the chance to build and lead an entire team from the start. This was the end of my rather short-lived break.

At Salesforce, after more than two decades in the business, we operate like a startup does, in the pursuit to deliver the best and innovative solutions to our customers.

The thing that excites me the most about Salesforce is, the variety of customers one gets to interact with across industries, and the wealth of knowledge you get to take away from every interaction.

You get a first-hand experience of the challenges and best practices that are followed within each of these industries, which is true, my favorite part of my job.